Now in its second season, “The Rev Presents” poetry series attracts regulars from campus and Albany and Troy’s wider literary community. The series is organized by the students of “The Rev” literary magazine (formerly “The Russell Sage Review”) and faculty advisor Matthew Klane, MFA, with support from The Sage Colleges libraries and Carol Ann Donahue Poetry Fund. The open-to-the-public visiting poets series is complemented by a monthly student open mic night. 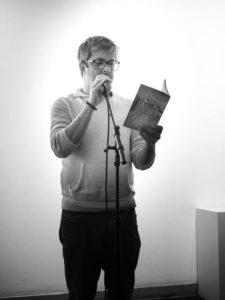 Klane said The Rev’s goal was to build on the popularity of what had been once-a-year events, like the Carol Ann Donahue reading by a well-known poet and the Wild Women poetry reading featuring students. “The Rev has claimed the second and fourth Thursdays of every month,” he said. “We have a core group each time, but also totally different audiences, drawing from different constituencies, which keeps things vibrant. Some have been intimate, some have been packed.”

Last year, a reading and open mic presented in conjunction with the Black and Latina Student Association attracted more than 100 students. This year, the Rev will collaborate even more. Fall 2018 includes an open mic night with a performance by spoken word artist Hidden Legacy, presented with the Office of Student Life, and a reading by Jeff T. Johnson and Emily Sieu Liebowitz, presented with the Opalka Gallery at Sage College of Albany. “Both are really cool experimental poets and artists with new books, and their style will match the Opalka space,” said Klane.

This fall’s lineup also includes Cynthia Hogue from Phoenix, Alix Anne Shaw from Chicago, Wendy Chin-Tanner of Portland, Oregon, and Jessica Hornik of Alpalus, New York. “Poets from last year have recommended their peers and we’ve had success building our calendar that way,” said Klane. “It is a compliment to the series. Readers feel supported by the student reaction and the environment we curate. They have a positive experience and trust their colleagues will, too.” 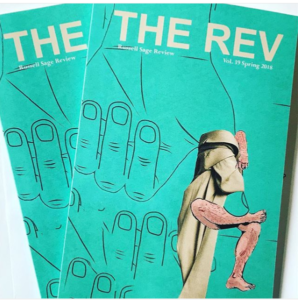 Of course, The Rev remains committed to publishing students’ work. The fall 2018 anthology of poetry, essays and art, edited by Hajar Hussaini ’19, will be released at the open mic night on October 11. Hussaini is a Writing & Contemporary Thought major whose own poetry has been featured at the Bravest Women in the World conference at the Massachusetts Poetry Festival and at the Art of Burqa exhibition at Pen and Brush Gallery in New York City. The Rev also publishes collections of Cento and Blackout poems that emerge from campus-wide communal poem-making activities. (Centos are assembled with lines from other poems and Blackout poetry is created by obscuring words from an existing poem with a permanent marker.)

“Part of my work as a poet is contributing to a sense of community,” said Klane, founder of Flim Forum Press and co-curator of the former Yes! Poetry & Performance Series in Albany, who has taught at Sage since 2011. “Whether I’m introducing The Rev staff to poets and people working in the field, or encouraging students who wouldn’t normally identify as poets, the student involvement is the most fun.”