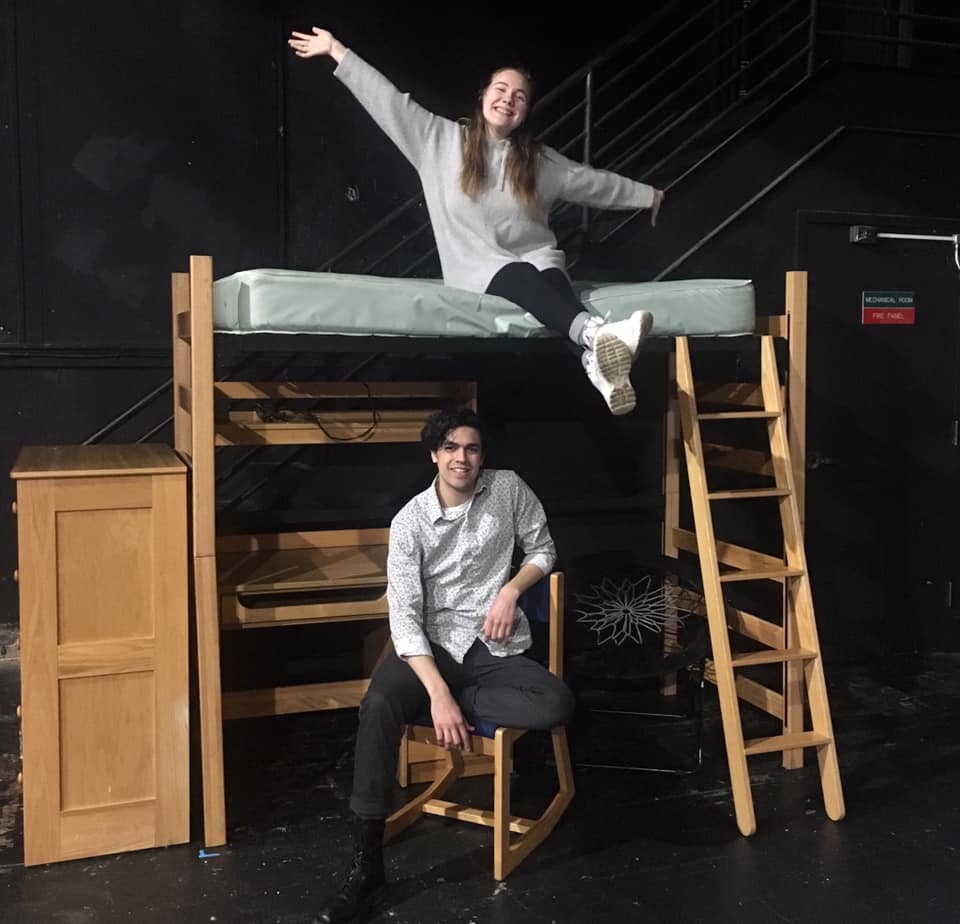 In addition to the permanent academic record held by a college registrar’s office, an off-the-record accumulation of conversations, arguments, triumphs and regrets forms an unofficial transcript of college life. It is this mélange that inspired student-directors Camryn Beck ’19 and Xavier René ’20 and their cast as they collaborated on “Unofficial Transcript,” an original production in April at the Theatre Institute at Sage.

Beck and René, English and Theatre dual majors and members of the Russell Sage College Honors program, signed on to the Theatre Institute project after a directing class with Artist-in-Residence Leigh Strimbeck. Strimbeck was impressed with their work and knew of Beck’s interest in a graduate degree in directing and René’s interest in dramatic writing; she and her colleagues invited the pair to create an original piece for the 2018-2019 season at the Theatre Institute. At the time, TIS had determined “Our Town” would open the season: “We took Our Town’s idea of community and the human experience and said what if we applied that to college issues, college life?” said René, adding that they also wanted to portray a more authentic college experience than what they see in media.

“Unofficial Transcript” became a series of non-linear vignettes, chronicling a year in the life of six college students. The show is a devised theatre piece, which means it started with a concept, but no script. The script emerged during the rehearsal process, collaboratively between the actors and creative team.

Beck and René share an affinity for devised theatre from Strimbeck’s class, and for René, from an acting intensive with SITI company.

“I enjoy the communal aspect,” he said. “I am also a playwright, so getting to sit with other actors and work on the words of the script in a rehearsal is so much fun. I get to play with the characters in real time and ask them questions. They give me all these wild answers. Devising work is communal, family-oriented, creative work together.”

“It feels more authentic than traditional theatre,” said Beck, “because every word, every movement, is coming from you and your team, not because the script told you to. It feels like we are a big part of the creation process.”

TIS productions usually start rehearsing four to five weeks before opening, but the cast and crew of “Unofficial Transcript” gave themselves two full months in order to build the script.

The scenes began with improv, explained Beck. “All of it comes from what we want to talk about. It starts from our own experience and then we can morph it,” she continued. “We start with a question or a topic and say ‘go.’ The actors come up with dialogue on the spot. At the end of a scene, we ask what we liked. We’ll decide to keep that thing you said or add this movement and try again. Once we get to a point where we like the structure and the dialogue, we’ll ask our script supervisor to record it.”

“Sometimes we end up in a very different spot than where we started,” said René, describing a scene that began based on sororities. “It was completely different by the time we finished that night, because of the direction we and the actors were taking. Things changed along the way and we discovered new things. That’s what’s crazy about this process. You never know quite where you’re going to end up at the end of it.”

While Sage students may have recognized the set — the show used furniture loaned from Residence Life — Beck and René emphasize that the college in “Unofficial Transcript” is not Russell Sage College. “It’s meant to be a nondescript liberal arts school, not really big and not really small. We wanted to keep it as vague as possible, as all-encompassing as possible.”

“We want people to go away and say, ‘That was me in college. That’s what I went through and someone finally got it right,” said René.

“On the flip side, for people who are about to enter college, we want to provide insight into what they should expect,” said Beck. “It is much different once you’re actually here and we hope some of the younger people take that away.”

Related on Horizons.Sage.edu: View a gallery of images from the Theatre Institute at Sage’s 2019 performances.

Related on Sage.edu: Read about Theatre major Francesca Volpe ’20, whose resume from Sage helped her stand out for a highly-competitive acting intensive (that included a chance to get feedback from the actor currently playing the Phantom of the Opera on Broadway!)